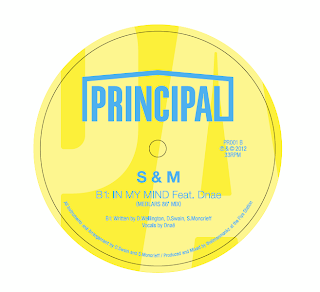 Well done to the both Jeff and Rob who've got their label's first offering coming out soon for all the dancers and party people up on their house vibe. Very much looking forward to giving this a proper going over

Here's the press release from the crew


Title: In My Mind (Medlar Rmx)
Label: Principal Records
Release: 31st January 2013
Cat No: PR001
Principal Records debut in January with ‘In My Mind’ by ‘thatmanmonkz’ affiliated act S&M (feat. Dnaë) - a deep, disco infused house release backed with a remix from Wolf Music’s Medlar.
Principal Records is the brainchild of DJ/Producers Rob Fahey and Jeff Daniels, the former having previously released for Under The Shade and the latter a UK-Music industry veteran having held positions with the likes of BMG and Sole Unlimited.
S&M comprises Danimal Swainger (aka Daniel Swain) and thatmanmonkz (aka Scott Moncrieff) who met in Sheffield’s notorious muso drinking hole, Dulo. Danimal had a history on the ‘edits’ scene while thatmanmonkz has developed a formidable reputation as Toddla T’s cohort in the Small Arms Fiya imprint.
For ‘In My Mind’ the duo team up with Dnaë, a hugely promising vocalist hailing from Kingston, Jamaica and now based in the steel-city. ‘In My Mind’ is gentle, rhythmic house with afro-beat overtones and rich, deep house sensibilities. Skittering
percussion sits underneath warm, sliding chord pads while Dnae’s vocal work flows beautifully throughout, complimenting the track’s infectious bass perfectly
Medlar, an increasingly in demand artist following strong work for the much-hyped Wolf Music, takes ‘In My Mind’ into jacking house territory with some classic Roland bass work and nifty drum programming which rough up the original’s vocal and piano content. S&M close the EP with ‘£4£’, a mid-tempo disco-house cut which swings low and loose. Musically dense in all of the right places and with a great synergy between original elements and sampled content, ‘£4£’ is a fine example of it’s genre
S&M’s ‘In My Mind’ is the debut release for Principal Records and is released late-January on 12”.
If you require any more information about the release, the label, DJ Bookings, interviews or would like to request a digital copy please do get in contact: info@theprincipalrecords.com