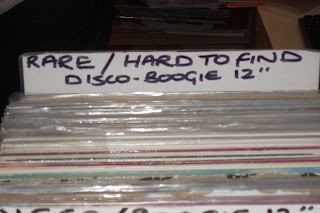 Go Bang Brighton's-Spring 2009 Selection
Complied by Ali (picture taken in a record basement somewhere in Brighton)
All tracks ripped at 128 kpbs, fine for home use only
Back on the record shopping vibe at last.

Lots of music recently found online or in the racks down our local vinyl trading posts here in Brighton (well the ones that are still left anyway) RIP Hedonizm, Infinite and Covert.

However big shouts going out to Pure Pleasure Music in Brighton, Juno Records and of course Discogs for supplying the wax.

Also picked up one of those fancy vinyl/mp3 turntable gizmos from Maplins on London Road that converts the black stuff into digital format, fairly simple to use but dangerously time consuming at the same time.

The good thing though is that the music can be shared now at home with everyone as well as on the dance floor.

Some new releases here covering the disco, re-edit, cosmic side of things plus the welcome return of Blackcock Records on re-issue (saves spending £££'s on Discogs I suppose) and keeps the money away from the bootleggers.

Also like the idea of having slightly heavier vinyl too nice one Harvey.

Props also to Anorak Edits, The Gallery EP and Discolexia Edits who head things up on the disco/re-edit tip alongside Downtown Party Network and Messalina on the slightly more string laden cosmic angle, all good.

Older material that was great to find included an Idjut Boys pre-release on Nuphonic and the classic "The Morning After" by Fallout, apparently one of DJ Fabio's favorite house tunes of all times.

Finally, check out some new skool old skool acid house business courtesy of Brighton's Soft Rocks that appears on the play list alongside some choice house music this time round.