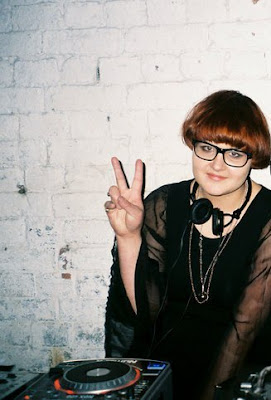 The once unintentionally poorly kept secret regarding the delights of disco is definitely out, with eyes and ears from once unrelated quarters now fixing their sights on the genre

However, if you keep your focus on the smaller grass roots picture eventually you’ll get to notice someone every now and again who casually bucks the trend amongst those that have established themselves and have moved aside so that others can nicely fill the gap left behind

Celia and her crew of drag/vogue/visual artists and DJ types could quite easily find themselves carrying on the disco charge from the front over the next few years with their strong focus on combining music, fashion, visuals and dance culture

The distinct possibility is, that their take on disco will be as faithful as you’re going to get from the next wave of protagonists already carrying out after dark operations on the cities dance floors

Celia was asked to answer some questions about hers and her crews influences, thoughts and musical leanings as we delve that little further under the surface and return to street level disco culture in Brighton with this interview

Expect a good insight into 80’s dance music, fashion, her take on what’s really going on out there and Windows 95 screen savers 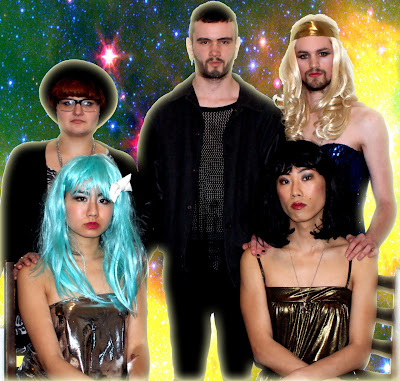 - You and your girls (as you affectionately refer to the male members of your crew) are a collective, can you explain who you all are and what you individually bring to the group ?
The core collective consists of myself as the primary resident dj; Rowan Briscoe aka Roma Disko and Joey Evans – Resident vj and twink du jour (both of whom also make up visual artistes The Cocteau Twinks); and finally Mizu Sugai and Buka Ki – our exotic divas


- One of the most striking elements of your gang is your age dynamic. From a perspective of someone that is younger than your typical disco enthusiast can you describe what it feels like to be less weather beaten than many of the older Mirror ball Massive ?
Disco, more so than any other genre, has this incredible, diverse following. When I first started out, I encountered a lot of purists, which could be pretty intimidating, but it's no big thing. We're not out to impress anyone with our encyclopaedic knowledge, but rather to have fun with the music we play, and maybe introduce people to some newer stuff they haven't yet heard!


-Your night XΛΠΛDU combines both past and present musical influences in equal measures. Do you find that attracting people from your own peer group is say slightly more challenging for you than if you were to ultimately entertain the notion of a new music only policy ?
It's a total fallacy that 'young people' only care for new music. I've have been playing disco, in various forms, out and about for almost 2 years now and it's always been well received. There are plenty of nights that happen outside of the older 'disco scene' that dabble, for example 13Monsters, Teen Creeps and Tongues. I think, if anything, our aesthetic would be the most challenging aspect.


-You draw directly from musical influences and cultures that historically aren't well represented in Brighton, what sources have you gained your influences from that are pushing you in say a slightly more leftfield direction than the other disco themed nights locally ?
It comes from a wide variety of media: films, literature, the artists behind the music and of course a nostalgia for an incredible scene we never had the chance to experience. Films such as Paris is Burning, Tongues Untied and How Do I Look were initially a huge introduction. Undeniably, Youtube is an incredible source of footage and film clips that would otherwise completely fade into obscurity.

The video art we use is often a heady mix of this.

- The NYC Vogue Ball culture is of interest to you, Octavia or Willy Ninja ?
Will probably get a lot of shit from my girls for this but, because NO ONE can vogue better, I would have to say I'm with The House of Ninja. 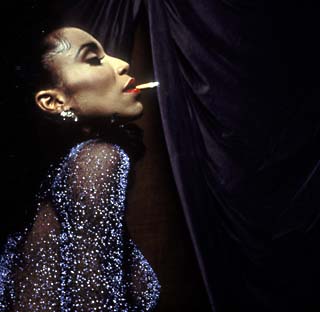 - Your night leans heavily towards drag/gay cultural references, how do you see yourself fitting into Brighton's gay clubbing landscape, do you feel that you could attract a gay partesan local following ?
We don't strictly intend for the night be a 'gay night' per se, but sexuality is an intrinsic part of the music we play. Saying that, however, I think when a lot us came to Brighton, we imagined there being something within the gay scene that celebrated the musical history of the culture. When we didn't find it we really wanted to create it. Most gay clubs like to reference and play newer house versions of gay classics, we want to play the originals and really get to the heart and soul of the past.

- Musically you cover the many ages and aspects of disco and house music culture, how do you source the music you play at your parties
For me, the internet is without a doubt the biggest source. If I'm not out dancing, I'm a total bedroom dweller when it comes to music, and a penniless one at that, and will admit to downloading the vast majority of my music. There are so many blogs out there digging up treasures from the vaults it's impossible not to. If I fall in love, I'll scout out a hard copy. Trying to steer clear of discogs at the moment, for fear of another binge! I'm a total sucker for bad album artwork, so charity shop bargains also make up a large part of my record bag.

- You've picked The Jazz Place on Ship Street as the location of choice for your new party location, any plans to venture around Brighton or are you making the basement your adopted home ?
We really wanted to put on a basement party, and I've always had a soft spot for the Jazz Place. I think we've got designs on the rest of Brighton though- it wouldn't suit us to settle into a routine of a monthly night at the same venue. Not naming any names yet, but we're hoping to bring some bigger things and probably a live act or two down, so we may have to venture out from our sweaty basement. We shall see what the rest of the year brings!

Daniel Wang - Like Some Dream (I Can't Stop Dreaming)

Alden Tyrell and - Lord of the Cockrings

-Explain the thinking behind your new night at The Jazz Place, what can people expect from you and the team at XΛΠΛDU ?
XΛΠΛDU is a Brighton based dance party collective, comprising of DJs, video artists and fierce drag superstars. Building bridges between the alternative scene, the disco scene and the gay scene, the music policy of XΛΠΛDU is a fusion of exciting new tracks, high energy italo, house classics and, of course, plenty of disco. Over the coming months we will be bringing you a selection of exciting new artists, as well as DJs who are the pillars of the Brighton club scene, in addition to our team of resident DJs.

In tribute to the glory days of Detroit, New York and Chicago clubbing, we turn the basement into our very own disco spaceship, complete with visuals from our team of video artists, The Cocteau Twinks.

We are re-launching at our new basement venue The Jazz Place, Brighton on the 25th March.

Hook up with Celia here

PHONE: Celia Mae - 07728565143Black Devil - No Regrets Two Men A Drum Machine And A Trumpet - Tired of Getting Pushed Around