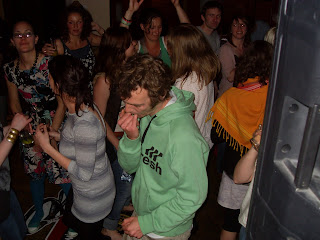 Inside Out at Al Duomo's Restaurant

Situated right next to The Pavilion Gardens in Brighton on the last Friday of every month you'll find the only regular Friday dance music night that operates completely out of the commercial infrastructure that dictates much of Brighton's club landscape.

Inside Out has been a staple part of Brighton's underground dance scene for well over 12 months now, offering a two floored party experience at Al Duomo's Restaurant for a pan European crowd of both tech and disco followers.

Downstairs the sound of driving house influenced techno holds court with guests including Evil Eddie Richards, Nathan Coles (June 19th) Kelvin K and Rocky (Xpress 2) all featuring alongside the residents over the last year or so.

However upstairs is where it's at on the groove based front with regular visits from Brighton's disco, balearic and boogie fraternity representing the growing network of dj's supporting the movement in town.

Not to be outdone, the outside space also gets a look in throughout the summer months as Inside Out regularly warm things up with an outdoor session before each party including visuals projected over the surrounding buildings alongside guest djs each session.

One of the nights most redeeming features happens to be the fact that both the management and door staff whittle out big groups of lads that happen to fall on the venue by chance, understandably this creates a really cool atmosphere for people to feel settled and chilled out in, something the more mainstream venues in Brighton now find very hard to do.

The next party is on Friday 29th May

Guest Kelvin K and residents down in the basement plus a whole handful of Brighton's groove based spinners upstairs holding it down until 6am.

This is a highly recommended night for anyone into the whole two room party vibe that used to be popular only a few years ago.

Happy hunting, feel free to tell us what you think once you've been