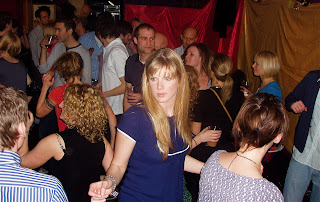 Beneath the shiny seaside veneer that coats Brighton’s club and mainstream bar spaces there’s an emergence of a different approach to music and social gathering that’s now enjoying somewhat of a renaissance.

Devoid of trend, status and financial procurement a small yet musically obsessed network of Balearic Hippies, Disco Evangelists, House Music Connoisseurs and Bloggers have finally all become aware of one another whilst at the same time finding out that they can easily cohabit alongside each other.

Referring to an earlier post on this page regarding D.I.Y Disco Culture, Brighton’s basements, restaurants and more discreet bar/club spaces are all lending their inherently underground appeal to what is now becoming a small yet gradually expanding series of sites for off piste club nights run by a network of promoters and djs gradually linking up on Brighton’s underground dance scene in a quasi Balearic fashion all be it on a more local scale.

To be able to trace back to when this started we don’t have to look that far. The coincidence of established club nights such as Swim, Tru Thoughts and to some degree The Brighton Jazz Rooms all more or less beginning to witness a downturn in attendance around the exact time the licensing laws changed clearly signals the beginning of the end for what was once a healthy and just as importantly eclectic music scene in Brighton.

Going out over a weekend back in the early naughties meant that away from the slow re branding of the more funky end of popular house one could indulge oneself within a myriad of musical styles such as deep house, nu jazz, broken beat, boogie, disco, tech house, breaks, latin, drum and bass, hip hop and funk courtesy of Rob Louis and Will Quantic at Tru Thoughts, Mex and Carl Faure at Swim and Ross Dewsbury at The Jazz Rooms which until the final session was The UK's longest running club night, probably still holds that title too.

Elsewhere Positive Sound System, Fluid Groove and On The House were providing house and tech heads with a regular dose of traditional yet forward thinking four to the floor music, so as you can see musical diversity was fairly widespread at the time.

Today Positive and On The House remain, the rest have all unfortunately succumbed and here’s where we pick up the story. As this gap in quality nights widened a void naturally was created and as such a continuum or replacement would naturally start to emerge.

Enter what is now the beginning of a new selection of nights and take on underground quality music to fill the gap.

It’s important to state clearly at this point that all the before mentioned djs and club nights were that good many involved have gone on to become internationally renowned either as djs, record label bosses or producers, this is something that the new breed that have filled the divide may or may not achieve but at least the party continues and the spirit remains the same.

Nights such as The Balearic Juke Box’s Come Together, Heavy Disco, The Recess’s 100Below, Late Night Lounging, Schtumm, The Residents Association, Barry Dust on Friday’s at The Globe and Inside Out have sprung up in recent times supplying just as an eclectic but also quality focussed alternative away from the mainstream.

Musically, these nights look to a different direction than say Ibiza/Mixmag and most definitely to some degree to venues that can offer surroundings where people can enjoy the music and social setting that their play lists meet with solid approval by the dancers that attend.

The genre divide is still in place but the focus on quality remains constant weather it be disco, jazz, funk, tech, broken beat, house or all of it thrown togeather under one sweaty roof.

Venues such as the basement at The Globe on Middle Street, Om Bar on Steine Street, The Hope near The Clock Tower, The Bristol Bar in Kemptown, The Fishbowl in the South Laines, The Jazz Rooms on Saturdays and Al Doumo’s Restaurant near The Pavilion Gardens provide the unique yet accessible space important for the development and equally as important enjoyment of this scene to build gradually and without interference.

To sum up, going out is getting good again in Brighton, the music has soul, the people throwing parties and events have a passion and we know where the party's at once again. Times are good even though the economic climate is fairly grim, if that doesn't remind you of a time when we all got on one then probably nothing will.