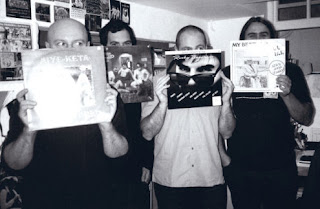 Sadly in Brighton these guys and their collective productions/releases and edits are relatively unheard of outside of a few heads on the scene, however globally matters are somewhat different with the guys racking up a healthy schedule with gigs in Ibiza, USA and recently Russia.

The thing is, all four members (Bobby, Andy, Chris and Piers) have an edge that most don't have in that their collective disco knowledge and associated record collections far outshine anyone we can think of.

So, whilst everyone else promotes promotes and promotes these amigos tend to let their music collections, knowledge, re-edit and original releases do the talking instead.

It also helps that the guys are signed to The Pool/Tirk DJ Agency which as far as we're aware of is an offshoot of the sadly missed Nuphonic stable.

Chris and Bobby recently headed out to Russia for a brief disco excursion to pass on the knowledge and love.

Before being let back out of the country Chris was interviewed about music, edits, more music and of course, the Brighton disco scene.

Not sure what happened to Bobby though, however reports confirm he's back home safe and well.