An Interview With Cosmic Boogie 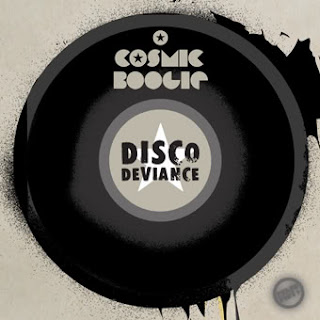 "Roni Size was a massive influence for me. The day I heard the represent album in 1997 (the mercury music prize winner) - my life was changed"

Ahead of his visit to Brighton, we caught up with Stu (Cosmic Boogie) Robinson to ask him a few questions about his label, musical influences and life in Liverpool.

Who and what is Cosmic Boogie?

Cosmic Boogie is my alias now - when it started out three years ago there were a few of us involved but slowly the others moved on to different things. I still get alot of help from Greg Wilson, who backs the site up with exclusive content, and there are a few others out there who help, but if you see an edit, mix or dj slot from cosmic boogie - it will be me.

When was Cosmic Boogie formed?

Some time late 2007 - Greg got a few of us together in Liverpool who were interested in doing something...and it moved on from there.

At that time who were the people that inspired you to develop the Cosmic Boogie ethos of marrying a blog site, record label and club night dedicated to groove based dance music?

Well Greg obviously was a huge influence and i cant shout about that enough, and the other lads who started it (Neil Meekin and Gavin Kendrick) were also a great help with getting it all kicked off at first. Since then I have met people like Andy Mac in Liverpool with whom I scheme massive ideas for the archive night (and do the odd bit of production), and also Dicky Trisco (Disco Deviance) whom I do the label with and he really helps push things forward on that score.

There are other people (Rob, Adam, Neil) who are all helping to keep things rocking - but ultimately, and probably rather cliche'dly - the decision was made for me by a love of the music.

You're from Liverpool which is considerably closer to Manchester than Brighton, recently we read an interview with Manchester's Balearic Mike who indicated that the city's alternative dance music scene dips off when the students leave for the summer, do you find anything akin to his experience from your perspective in Liverpool?

I could talk all day and night about Liverpool's odd club scene. To be honest, the scene for us is nowhere near as big as Manchester. In Manchester you have four or five nights dedicated to whatever our scene is called (disco??) - in Liverpool, you struggle to get one off the ground - students or no students. Im not saying that people dont love their music in the city because they do - and nights like Chibuku, Circus and the once mighty Cream have proved that - however, to try and do something independent and underground is not easy.

We've had the lows of having a few people in for Ashley Beedle (which was soul destroying) to the highs of filling the place with Greg Wilson and Chris Duckenfield. There are some great people in Liverpool who try hard to push this scene, but ultimately I think people like the sound to be electronic which is fair enough. Archive has a decent name I think now, and we will continue to book the kinds of acts we want to hear - and hopefully whatever small crowd there is will get onto that and start to come down as well...I suppose we would usually take a break in the summer months - maybe only doing a residents party - so yeah, that must be student related. The city swells when the students are here though - its not that its only students that like the archive sound its more the fact that there are plenty more people to target.

Stu, your musical influences range from early house through to drum and bass the latter not easily associated with the groove based scene today, can you expand on those producers and djs that got you into that style of music from that scene? we see that Roni Size was a big influence for you

Roni Size was a massive influence for me. The day I heard the represent album in 1997 (the mercury music prize winner) - my life was changed. Id had decks for a year or two then but had been scratching around playing party drum and bass and stuff I wasn’t really into myself - more playing for my mates, but then with the advent of this new musical sound into dnb I was hooked.

I still liked the darker stuff - but the deep jazzy and then soulful stuff really hit home. I stayed with dnb for along time with other people like Marcus Intalex and Calibre - and still love it, but I also kept my eye on funk, disco (and - oddly - collected early electro breakdance records).

I'd say that both Giles Peterson and John Peel helped keep me focused on a bigger picture. Being a dnb dj was tricky as it was only one kind of music you could really play and to vary it was hard work. That’s what I love about what I play now, the variety - I can play everything, all tempos and sounds - as long as it fits the mood.

When you say that drum and bass is not associated with the groove based scene of today I'd beg to differ - dnb is groove based to the extreme, its just about 50 beats a minute faster, so you simply dance to every other beat and your plodding along to a slow disco track (of sorts :-)). Im really pleased that I got to where I am musically by listening to dnb and stuff like that - alot of people seem to have been into house for a long time, a genre I’m only really starting to dip my toe into now (apart from the obvious early house classic stuff), and that's pretty refreshing for me.

In general I've always liked all kinds of music really - apart from Trance, which is clearly the work of that big eye thing out of lord of the rings. Other than that though - anything goes.

Going further back, my main influences were my mum's Motown and Northern Soul, married with my dads love of stuff like Talking Heads and Ian Dury. I couldn't really ask for much more than that as a kid.

Ha ha - probably not - back when this was all new with the clubs we can only read about in books these days - I guess disco had some incredible, unparalleled years. 2010 the year of great party music though...for sure.

Cosmic Boogie the record label features a fair selection of music that falls under the current connotation of what modern day disco comprises musically, however you've described your style and approach as 'groove based' can you expand a little on this please?

Yep - I’m not limited to only groove stuff - I mean I like pretty much any beat or rhythm under the sun if done well - but if there is one element that always grabs me and makes me want to dance its the groove. You cant play every track in a set like that, but you can make sure that everything you play makes people want to dance - and that would be why I say my approach would be groove based. Everything I play would make me want to dance, and quite often when I've put something on, I do.

The edits on the label have been provided by some fairly synonymous names within the groove based scene such as Greg (Wilson) and Ashley (Beedle) Is there anyone in particular that you would like to work with in the future and can you tell us who you've got lined up to provide more edits for the label going into 2010?

Great question. Yes - there are loads of people. I would love more than anything to get

Sean P on the label and I hope to do that, I've also spoken to some people who you might be surprised with if I could shout it out - but nothing solid yet so I’ll keep that a secret. Maybe if would be nice to also do an edit EP from some new producers like The Revenge showcasing an older sound that they might not get chance to release anywhere else - so that’s something I might explore as well.

This year there will be more stuff coming from me, but I’d expect at least 2 guest edits a year from people who know it because they lived through it. How better to be shown than by the originals...if anyone who reads this ever wants to send me stuff - Cosmic Boogie has quite a distinctive sound - really black funk and groove based I suppose, but I’ll take a listen to anything anyone wants to send. Just find my contact on the blog or soundcloud and ping it through.

Alongside running the blog site and label you dj as well, who's currently featuring on The Cosmic Boogie play list this month and has their been anyone in 2009 that has really impressed you above anyone else?

I thought THAT track was great, I thought the resident advisor mix was brilliant (even though it’s a lot of deep house i think). That was probably the best stuff of 2009 for me - oh and Linkwood, whom I think are fantastic.

The album is superb, production great and solid from start to finish. Have a look out for a guy called Onur Engin who is doing some brilliant edit stuff as well. As for what’s been on the playlist, I'm still buying most of my music from pre 1980 - so id have to go for The Undisputed Truth. Norman Whitfield - a true genius of our time.

Many thanks Stu for taking time out and expanding on the Cosmic Boogie imprint.