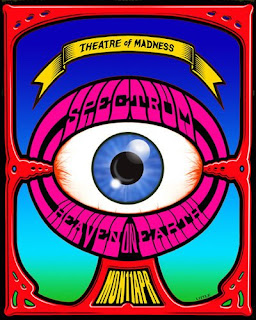 Was fortunate enough today to catch a link posted by Mike Ashworth on Face Book which highlights an exhibition of graphic design associated with the development of dance music culture.

Oddly enough only last night I was down the boozer with my mate Andy having a few beers and the topic of how the dance music scene has significantly changed in the last few years, the culture it still manages to represent and where it's heading came up several times.

The show itself has been put together by Mark Wigan an Urban Art pioneer, an initiator and chronicler of club culture since the mid 1980s. His prolific output has included exhibitions worldwide, live painting performances, illustrations for I-D Magazine and the NME, club promotion and club and music graphics including The Limelight Clubs in London and New York, mural paintings described by Andy Warhol as HOT, nightclub projects include the Brain Club, LoveRanch, Cafe de Paris, P. Picasso club Tokyo.

The exhibition pays homage to the key developments within dance music since the acid house days, however the main interest is focused not on the key individuals (djs, producers and promoters ect) but more so on the concept of social climate, environment and participation that make "Our Culture" an interesting documentation of a culture we all have and still play a part in today.