Get Up and Boogie by Freddie James (Tim Rivers Edit) 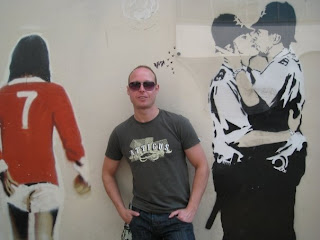 Man, everyone in Brighton is getting in on the re-edit action this month, this one has been done by non other than Mr Acid House himself and fellow Brighton based groove based survivor Tim Rivers.

Tim runs the fantastic blog site some of you may have come across called The Acid House where he champions the sounds of rave and club music from the glory days of going out dancing in fields and warehouses across this green and pleasant land of ours.

An accomplished crate digger in his own right, Tim extends his musical tastes far beyond that of his blog site which is approaching it's 10th anniversary by further establishing his musical credentials by dipping into a little groove based action from the disco end of the musical universe with this edit of Freddie James's Get Up and Boogie

Tim strips out the vocals and goes for a more beat driven approach by extending the grooves on his first edit outing to date.

Tim's words when asked about this new musical stand were.

Warm Sound is a project I started to channel some creative energy into experimenting with music manipulation and editing. I have always been an avid record collector and would often find myself buying a record even if it was for just for 30 seconds of a tune that I liked, or simply the urge to buy some black stuff meant I would take a punt on a record without any prior knowledge or listening to the tune and hoping it would sound alright when I got it back home on a deck. While the excitement of finding a gem was always the icing on the cake, more often than not 10 seconds in and I knew the Christmas turkey had arrived early. So I recently now set myself a new challenge to go eco and recycle the records I had bought that would have never made it into my record box before, and would be lurking at the back of the shelves somewhere. My first venture into this challenge was earlier this year re-editing the 1989 Remix of Wang Chung’s Dance Hall Days, and springing new life into an otherwise unwanted record. The most recent project is from a disco tune from the late 70’s by Freddie James called Get up and Boogie. I felt this tune had so much going for it, amazing percussion, pure energy and a peak time anthemic (I may have made that word up) quality to it. Personally I think the edit is quite sympathetic to the original, I avoid adding lots of effects, but kept the edit close to the orgins as possible, by removing certain elements, rearranging and extended parts for a more contemporary feel with for today’s dance floor in mind.

Being a personal friend and occasional dj at our parties, it's with great pleasure that we host his first re rub, even though he claims it to be a work still in progress.

Tim, when you read this please except our apologies for ripping this one for our collection mate, it would be rude not to Sir.