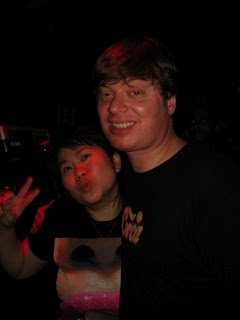 Hell yeah, absolutely delighted to to eventually get Adrian (AD) to give us a brand new mix for the blog.

After hooking up with AD recently it became clear that this fella knows a thing or two about music as his mix demonstrates perfectly as he winds his way through a lovely selection of discocentric cuts in a blissed out balearic fashion type of affair.

Having come out of retirement recently AD shares his musical knowledge and selection skills on this very special mix tape he's kindly provided.

AD originally hails from Cambridge and started DJing in 1989.

He was involved with the Tonka Crew and played on the beach after the infamous Zap nights in the early 90's.

Following a move to Brighton in 1991 he had various residences before becoming involved with the free party circuit playing regularly with Babyboom soundsystem, who were responsible for the all night Ovingdean beach parties.

He has done various one-off nights playing with local and named DJ's including a night at The Zap with DJ Harvey, before taking a break.

Recently AD has come out of retirement and started to spin tunes again drawing from years of record collecting experience, he plays a variety of styles, making his music diverse. His last big gig was with The Bad Passion Project in London where he played alongside the legendary DJ & Producer Felix Dickinson to a packed crowd.

Catch AD in Brighton on Saturday 24th October in the basement of The Globe on Middle Street for a night on intimate underground party action in the city center.

This Time Around, Let It Happen - AD Cox (Tonka Sounds) Mix by gobangbrighton