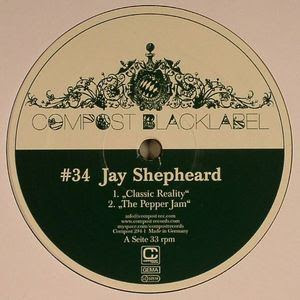 The new disco and deep house offshoot of German label Compost Recordings. If you were to ask anyone including your mother in law these days to describe house music, you would probably receive a hundred and one different answers based around that particular question, not a bad thing but more a reality of how diverse this genre has become.

OK, lets be honest, today what's commonly understood by the many as house music has moved on from the original sound but that doesn't mean that the sensibilities of early house have been forgotten by some of producers that are around making music today .

Artists such as Phreek Plus One, Jay Sheppard, Matt Flores and Studio R continue to release music that maintains many of early house music’s flavor for texture and warmth alongside more cosmic influences that are prevalent on today’s newer disco releases. Call it deep, minimal or cosmic, Compost Black delivers it on time, every time.

Fans are a very mixed bunch, Laurent Garnier, Peter Kruder, Dumo and Chris Duckenfield all give the label the thumbs aloft, so with those guys on your side you know you're doing the right thing.

Here are links to just two of the labels artists, see what you think.

Phreek Plus One on myspace