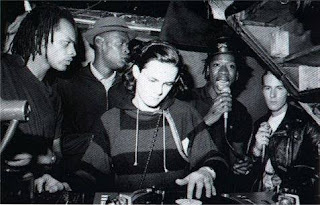 Much blessings to the man like Foz for banging a link up on facebook over the weekend directing us to the test pressing blog site.

You'll find original sound system party vibes taken from two of the most influential acts in British dance music over the past god knows how many years if you click the link above.

Coming from Bristol I clearly remember as a young 15 year old rocking up in the city center and checking out the sights and sounds of that time, hanging out watching all the BBoys and Punks whilst also visiting Tony's Records and also HMV and Virgin, the latter displaying the original Wild Bunch graffiti artwork on the wall opposite well after The Wild Bunch became Massive Attack there after.

Recalling those days spent tracking down all the electro and hiphop sounds in Bristol was probably the first real big time experience I had as a music fan trying to figure out the culture and music associated with the early UK hip hop scene in the southwest.

Enjoy the mixtape, it's a real taping too, with crowd noises, the lot

Finally there's some early house music played at the end, thumbs up