The Three Degrees - Giving Up, Giving In 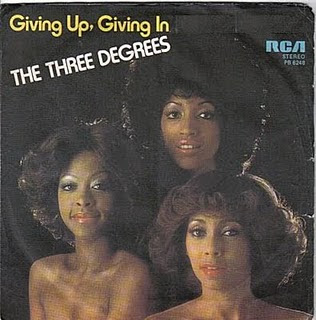 The group has simply consisted of three female vocalists at any given time, however there have been twelve different ladies that formed the three women line up from 1963 onwards

The groups biggest success came in 1973 after being signed to Philadelphia International, they recorded with session band MSFB to produce the theme tune to Soul Train (USA) entitled TSOP (The Sound Of Philadelphia)

However it was Helen Scott, Valerie Holiday and the formidable and somewhat sassy Shelia Ferguson that appear on this particular release with Scott replacing long serving member Fayette Pinkney within the groups line up in 1978

The Three Degrees - Giving Up, Giving In (Slack Edit #7)

Audacity was used to cut, splice and repeat the sections chosen for this edit which is again another slack affair with a fair degree of trail and error attached to it if you listen closely enough