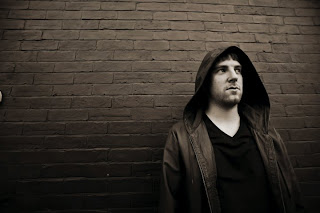 If you're a member of the re-edit scene that's sprung up on Sound Cloud in the last twelve months you should be more than aware of Brighton based Rob Fahey or Black Lodge as he is otherwise known as.

His edits have caught the ears of many fans including The OOFT Crew, Cosmic Boogie, Cottam, Disco Deviance, DC Reworks, I Cube, Hawk Edits, Leo Zero and Jimpster amongst the thousand keen followers Rob now has.

Rob kindly took some time away from his current workload prior to what's set to be a major couple of months on the release front to answer a few questions we threw at him.

Where do you source your musical references from?

My dad had some pretty good taste when I was a kid, summer holidays were usually fuelled by Bob Marley and Steely Dan. I grew up in Manchester which is a very good place for music, it was a fantastic revelation as a 15 year old to have access to some of the best record shops & club nights in the UK, it’s really got an amazing atmosphere and counter-culture which has always influenced me to keep on with the music .Club wise going to Electric Chair and places like Planet K(or anywhere in Manchester’s Northern Quarter) had a huge affect on me and my musical preferences.

What got you into the groove based sound?

When I first started buying records I was strictly hip-hop, uk & golden era stuff, but as is usually the case when I started collecting the records the hip-hop sampled my taste changed rapidly. I’ve always enjoyed DJ’ing and bringing that special track to an audience, especially if you make them dance! Groove related music to me is really all about that, great music, no attitudes and you can dance to it... Boom

Tell us about your forthcoming record releases?

I’ve just had a release out on a new label called Kojak Giant Sounds, the first release in fact. The first week in May I’ve got my first release out on Traveller Records, which is a Finnish label run by a top bloke, DJ Ionik. Both are available (or will be) on Juno, Phonica & Piccadilly.

Going forward from this point I’m working on an EP with Future Classic which is really exciting, I’m also in talks with some other labels that I don’t want to jinx yet! So in short things are happening, people are paying attention and fingers crossed it’s gonna keep that way!

Why did you hold out and wait for a vinyl format release instead of taking the mp3/wav route?

I’m a vinyl collector, vinyl is a tangible format and the sound quality is second to none. But let’s be honest here, for the PRESTIGE!

What music did you listen to as young man, did you raid any family record collections?

Ha, one of the first records I bought was the MC Hammer album, or should I say my Dad did as I was seven. But seriously I remember staying up late one night and listening to the radio, I think I was about 8 so it was 1990 and taping some techno mash-up with the Beastie Boys, I can’t tell you how long I thought about how those sounds were created, I guess it’s that fascination that’s been the driving force behind my music.

Tell us about your radio show? (Not doing this anymore )

Where can you be found spinning records?

At the moment I hold a monthly at The Fishbowl in Brighton, I’ve been playing there as a guest or resident for perhaps 4 years now, really love that place and all the staff, it’s been a place that’s very dear to me and I’ve had some great times there.

May 21st I’ll be putting on night at The Globe which is another fantastic Brighton boozer. I’m lucky enough to have two veteran Dj’s on board for it too.

Alkalinio (Munich/Germany) and top geezer Anthony Cox, it’s gonna be a fantastic night. I’ve got a few other top Dj’s lined up to play in the next few months too so watch this space.

Other than that, I joining forces with a troop of top Brighton Dj’s to invade Helsinki for the last weekend in May (Askew/Jazz Rooms/Richie Phoe) which I imagine and hoping will be messy.

Through your eyes and experiences, how has the groove based scene in Brighton changed in the last 2 years?

I honestly think the fact that everyone’s actually working together instead of against each other and playing complimentary music has changed the scene, there are so many great Dj’s playing proper music in Brighton at the moment and the thing I’ve found with the groove based scene is there is very little bitchiness for want of a better word.

Everyone’s putting each other on and helping out, which makes for better nights, plus the same punters are turning up, this to me is what a ‘scene’ is all about.

Describe your studio set up and how you go about arranging your music?

I use Ableton to sequence everything, I’m not scoring a film so it does everything I need, it’s fast, efficient and reliable. Other than that I’ve got several pieces of hardware that I’ve collected over the years which are now really helping me create and develop my own sound and style.

Other than that, if I’m in a good mood I’ll make a decent track, that’s all it boils down to for me, that and experimenting with sounds.

What’s been your most successful edit/original production to date?

To be honest it’s the first track I stuck up on Soundcloud, a really cut up edit of nu-shooz, it may be released on Kojak in the future but I’ve been steering away from producing edits for the past 5 months.

Other than that, my newest track “Lay it on the line” is getting some serious interest at the moment and has been a foot in the door to some big labels.

Just want to give a mention to the chap who sang on that track, Guests of Nature. Expect lots from him soon!

Explain how you hooked up with Alkalino?

Well Alkalino is a very prominent editor on Soundcloud, I’m a big fan and he’s a top bloke, I’ve been using my gigs to put faces to names, which is kind of important to me.

When not djing or producing where do you go and listen to other Djs and producers in Brighton?

That’s a tough one! Go Bang and Paul Budd’s Disco Deviant are both firm favourites of mine because the same people are coming out and showing support, got to mention Steve KIW too, who’s rocking it at the moment.

Other than that I always try and catch The Impellers who are without doubt amazing!

Where do you see yourself in 12 months time?

Hard to say at the moment, if the music breaks and I start to get some real Dj bookings who knows, I’m doing this because I love it, no other reason. I’m just gonna keep on keeping on.

Current top 5 tunes in your bag?

Much of the attention you've received has been on line through soundcloud, does this frustrate you in any way as the music isn't getting heard in it's intended environment (on the dance floor)?

No not at all, Soundcloud has been instrumental in my success imho; all my current offers and contacts have been through it.

This is the first on-line ‘music site’ to get it right, instant feedback, huge audience and honest and helpful criticism, plus the sense that there is an actual community.

There are people from all over the globe downloading/listening to my music and I often get a pleasant surprise to find one of my tunes turning up in a mix.

We wish you well Rob, many thanks for the interview.