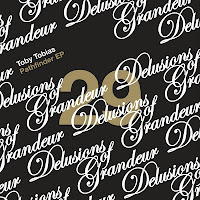 Always great to end a month and start a new one on a high, especially when the music is as good as the new release from Toby Tobias that I found whilst having a quick search this morning on line

A1. Pathfinder
A2. Pathfinder (Fabrizio Mammarella Remix)
B1. Backbeat
B2. Abregon

Never obvious but always engaging, definitely one for the floors early on in 2013 that should stay around long enough to stamp it's authority over the course of the next 11 months this year .... possibly longer

Here's what the industry has to say about Pathfinder

Toby Tobias joins the DOG crew for release number 29 and fits like the proverbial glove with an incredible EP which truly lives up to its name. Itʼs probably fair to say that Toby is one of the unsung heroes of the UK scene having played a pivotal part in developing the underground disco scene of the late noughties. His Late Night Audio parties alongside releases on Rekids, Letʼs Play House, Nang and Quintessentials speak volumes as to the mans skills and fastidious nature and here he delivers what weʼd be so bold as to say his best work yet with the 'Pathfinder EP'.
The title track kicks off and instantly you know youʼre in for a joyous ride with the rawest house-not-house beats, P-funk bass and echoing stabs. Toby has a way of mixing up the sounds and vibes to bring a fresh and original sound but with plenty of depth and drive. Next up Fabrizio Mammarella gets stuck into 'Pathfinder' reworking the original into a slightly straighter, bass-heavy monster of a track which keeps the dubbed-out chords but totally wreaks havoc on the bottom end when the bassline drops.
Flipping over weʼre treated to the slower paced 'Backbeat' which builds around floating chords, chopped vocals and a boogie-inspired bassline. A true Balearic beauty! Finally we have a stunning little number called 'Abregon' which completely defies categorization but manages to successfully fuse elements of jazz, fusion, hi life and house into a brilliantly quirky track which we challenge you not to want to do some freaky-deaky dance to.