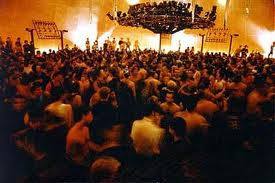 OK, it's always a very special honour to be asked to play for other party hosts but what makes this one just that little bit more important is that for many years now playing music on the "gay scene" hasn't been something that has presented itself to me and to some degree Affy as well

To put things in to context, Wild Fruit run by Paul Kemp is the countries largest promoter on the scene whilst DSD are resident DJ Queen Josephine plus Kate Wildblood from Sundae Sundae who have been stalwarts of regular parties in Brighton for a very long time

Naturally this is a big booking for us both as well as one that feels exciting and challenging in equal measures from the perspective of being guest djs due to the reputation and history that follows our hosts Paul, Kate and Jo

The remit that comes with the Danceteria party is clear as in going back to it's original roots which I believe to be something along the lines of music from New York be it house or disco, right up our street then !

Affy has a great appreciation of what to do however not having been to many things Paul, Kate or Jo have been part of putting on over the years leaves me a little uneducated on what to expect from the crowd

Not a bad thing but a challenge none the less

Saying that both promotions we've team up with are exclusively gay nights would be wrong as they are both generally mixed affairs with a strong gay following. However, going into this environment for me at least has bought back some fond memories of days gone by as a dj whilst at the same time driven me to think about a different environment than the usual ones that I'll be playing in over this coming Easter weekend

Both Dave and myself hadn't had much if any exposure to gay clubs and in particular anyone gay for that matter,  however unbeknown to us we ventured along to meet our new friend (soon to become Dave's girlfriend) at the agreed location and time

We waited a few minutes and then hastily turned tail deciding that this place wasn't for us, leaving slightly disappointed and also genuinely alarmed that we were exposed to something not really in keeping with our then macho ideas and aspirations as British Servicemen

Around an hour after getting home and going over what we had seen or not as the case was, Margaret  phoned up to tell Dave she was there waiting and that we should come back

The same scene greeted us upon arrival once again, primarily men dancing everywhere this time though with a few more girls getting in on the mid afternoon dancing action

I became one of the resident djs soon after that first visit to The Recovery Session thanks to Margaret and my new dj partner Ant, this now meant I got to know even more people and that was it, my first and sadly last experience of djing in a predominately gay venue for many years

Dave and Margaret sadly split up after a few months, I dated a girl from that scene but she wasn't for Me and I eventually learnt about humility after nearly going down a path of self importance by mistake (thanks Dave and Kay his new girlfriend for putting me straight on a few things)

See You on Easter Sunday for The Danceteria, good times and more lessons in life as a dj await once again years later maybe ?

Written with fondest memories of Margaret who is sadly no longer with us (this had bought it all back)
With special thanks and love to Dave, Larry, Karl, Yvette, Abby, Steve and Ant plus all the people from that time and space (you are not forgotten)