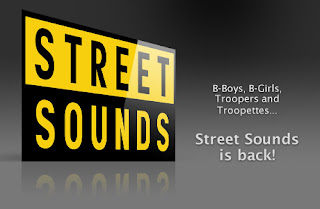 Seminal 80's Electro Label Streetsounds is set to make a comeback with some new releases in March this year.

If you are of a certain age you'll have fond memories of this labels impact on the UK dance scene when you were a teenager trying to pull of some elaborate break dancing moves down your local shopping center on a Saturday afternoon no doubt.

If however you're a little less long in the musical tooth this timely return will give an indication of why people sometimes get confused when people refer to electro house as electro, Go Bang Brighton being one of the many.

We can confirm that the new Street Sounds album is to be called – ‘NU ELECTRO Volume 1’ and of course, will be the first in a whole series. The official release date of Street Sounds Nu Electro is Monday 23rd March 2009. The album will be available as a double CD and Very limited Edition 2 x 12” vinyl. Both CDs will be DJ mixed like the original Street Sounds Electro albums. I will be able to announce next week who is going to mix the album!

Each week leading up to the album release, we will be announcing tracks which will be on the album; a roll call of the biggest names on the Electro scene and I can tell you this week some of the incredible tracks already confirmed for the album include:

Dynamik Bass System - Side By Side

Electronautas - Back In The Day

…as well as new tracks by Dr. Schmidt ("The Engines of God"), the legendary Newcleus and so, SO much more!!!!!

Street Sounds Nu Electro will feature exclusive tracks which will not be available anywhere else as well as featuring the biggest Electro records out right now and will cover ALL the genres of Electro from Electro Funk to Electrotech.

We have been asked by many people if they can also submit their weekly chart. If you are an electro artist, label, producer or DJ, we would love to receive your chart submissions. Please do so by 5.00pm (GMT) every Wednesday. Send to admin@streetsoundsmusic.co.uk (please make sure you include your name and contact details).

The Street Sounds Electro Chart can be heard first on Martin Evolvah’s ‘THE FUTURE SHOCK‘ show on ICR FM every Friday Midnight until 2am - www.icrfm.co.uk